Topographical Description of the State of Ohio, Indiana Territory, and Louisiana 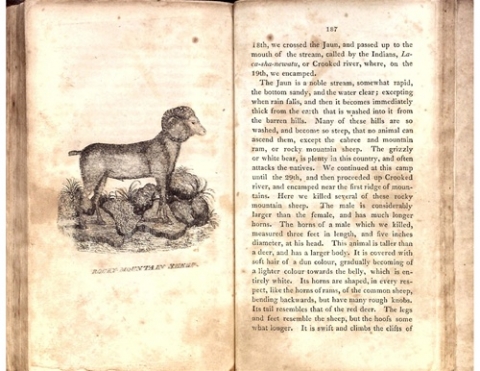 A topographical description of the state of Ohio, Indiana territory, and Louisiana : comprehending the Ohio and Mississippi Rivers, and their principal tributary streams ; the face of the country, soils, waters, natural productions, animal, vegetable, and mineral ; towns, villages, settlements and improvements ; and a concise account of the Indian tribes west of the Mississippi ; to which is added, an interesting journal of Mr. Chas. Le Raye, while a captive with the Sioux nation, on the waters of the Missouri River

This book is of interest primarily for including the journal of Charles Le Raye, a fur trader who was purportedly captured by the Sioux on the upper Missouri River. It included descriptions of the Native American peoples whom he encountered and the animals of the region. The journal is actually a fabrication, drawn from contemporary accounts of the Lewis & Clark and the Pike expeditions, but it is the source for the first descriptions and scientific names of seven species of American mammals, including the mule deer.