The Tour of the World in Eighty Days

The Tour of the World in Eighty Days
by Jules Verne 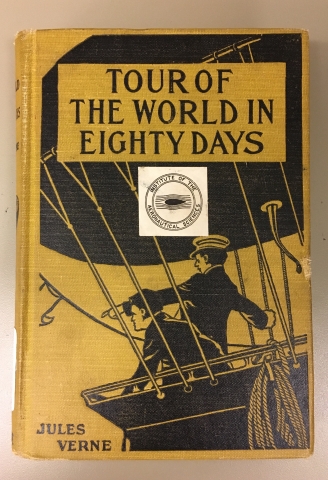 The tour of the world in eighty days

This copy of one of Jules Verne’s most celebrated adventure tales has an elusive past. With no publication date, an annotation on its inside cover dated ‘1925,’ and a blind stamp minted 1932 on the title page from the Institute of the Aeronautical Sciences, this book presents just as much wonder itself as the story it features. The Smithsonian Libraries Research Annex (SLRA) discovered that this copy of Verne’s work, among others, had been released by Chicago-based publisher M.A. Donohue in the early part of the Twentieth Century. This edition of Tour of the World shared the same cover as many of Verne’s works found in Donohue’s series collections. Tour of the World has been translated and reprinted into several languages since its initial 1873 release, capturing the imagination and wanderlust of audiences of all ages since. SLRA received this volume as part of a legacy collection from the National Air and Space Museum. The French novelist, poet, and playwright, is today celebrated as a groundbreaking 19th century adventure and science fiction author.