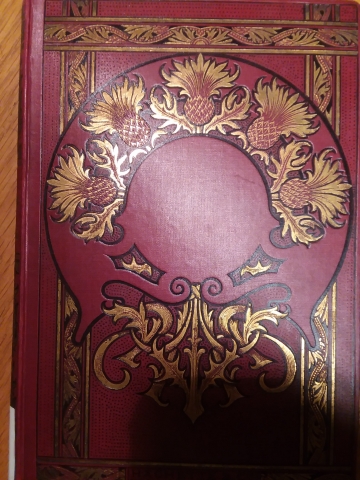 Léo Dex was the pseudonym of the brillant and distinguished aeronautical engineer Edouard-Léopold-Joseph Deburaux, who was commander of a company of hot-air balloonists attached to the French Army’s First Corps of Engineers. Under his given name, he wrote many books and papers on the possible uses of hot-air balloons for exploration and warfare. His grand experiment in balloon exploration—sending hot-air balloons across the Sahara from Tunisia to the region of Timbuktu—ended in failure, and he died shortly thereafter. As Léo Dex, he wrote adventure stories for young people; the book described here is one of those. Its hero, Captain d’Ex (surely his alter ego), longs to travel in Africa and, to his delight, is sent on a dangerous diplomatic mission to South Africa. The book is bound in a red cotton fabric, lavishly decorated with embossing, gilt, and floral motifs. The pages are gilt-edged. More than 29 engravings, some based on photographs, enliven this exciting story.