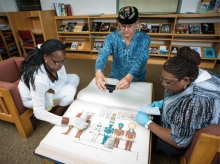 The Warren M. Robbins Library Endowment was created in 2006 to promote the resources of the National Museum of African Art’s Library and increase access to the world’s premier resources in African art, history, and culture to scholars, teachers and students across the globe.

The Robbins Library serves patrons worldwide and boasts a collection of more than 45,000 volumes and 4,000 artist files in its archive of African artists. Thanks to the continued generosity of individual donors, The Warren M. Robbins Library Endowment has grown and the Robbins Library is now able to address the needs of libraries in Africa by distributing important publications on African Art. Thanks to digitization projects, free access to the Library’s African history resources has expanded significantly. 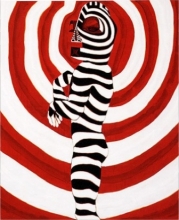 “I started as a librarian at The African Art Library during its formative years.  Originally housed in the historic Frederick Douglass House Complex on Capitol Hill, the library consisted of just a few hundred books.  Although Warren Robbins’ vision of the library was for it to become a scholarly resource center for African art, ‘second to none in the world,’ during the first few years of our existence it never crossed my mind that we would someday become part of the Smithsonian Institution, and beyond that grow into the leading library in the world for the study of African visual arts, history, and culture.”