"From Billions to None" Film Showing & Lecture 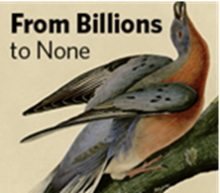 The film, "From Billions to None," will have the power to move minds. It will be the strongest element in the 2014 centennial effort to galvanize awareness of human-caused species declines. The trends, documented by careful research in the sea and in the wild, are overwhelming. If anything, species and habitat risks are greatly underestimated. They can, but even they need help. Populations of billions of beautiful birds were exploited to extinction in 1914, in less than 50 years. All species are vulnerable. 2014 is the centennial year of the "impossible" extinction of the Passenger Pigeon. It's a once-in-a-generation opportunity to present a powerful, little-known species story to a wide audience.

David Mrazek, Producer/Director/Writer
David Mrazek is a producer and writer of numerous prime-time national PBS series, including programs for POV and The American Experience. He also directed and co-wrote Keepers of the Biosphere, about the role of microbes in the global ecosystem and program three of the four-part PBS series, Intimate Strangers: Unseen Life on Earth. This program is currently used by Discovery Education, Life Science Series, Grades 9 to 12.

Joel Greenberg, Co-Producer/Co-Writer
Joel Greenberg is a consultant and writer specializing in natural history and has authored numerous books, including A Natural History of the Chicago Region (2002, University of Chicago Press). He has just released A Feathered River Across the Sky: The Passenger Pigeon's Flight to Extinction, the first history of the passenger pigeon in 50 years, published by Bloomsbury USA (See upper left of this page). Joel is the recipient of several awards for his environmental protection work.