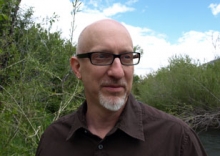 Martha's Flight into the Future: Heresy as Hope

Christopher Cokinos, the author of Hope Is the Thing with Feathers: A Personal Chronicle of Vanished Birds (Tarcher/Penguin), the classic natural history of six extinct North American birds, will share some remarkable stories about the passenger pigeon, the Carolina parakeet, the great auk, the Labrador duck, the ivory-billed woodpecker and the heath hen.  There's the tale of the biology professor (and part-time milk man) who tries to save the heath hens on Martha's Vineyard...the graduate student who returns south in the 1940s to write the first book on the ivory-bill as its forest was being logged in order to make tea-crates for the British Army...the story of the boy who shot in 1900 what is still officially considered the last wild passenger pigeon.  These stories tie us to the past and the future, the land and the sky--and raise profound questions about the role of environmental memory.

This year is the centennial of the death of Martha, the last passenger pigeon on Earth.  The extinction of her species--once the most abundant land bird on the planet--offers more than the usual lessons we draw from such losses.  In fact, those usual lessons of "remember" and "never again" are failing us at a time of fast-moving environmental change.  What was heresy 100 years ago may have saved the passenger pigeon.  What are the heresies that may help us and the biosphere today?  Can we find a balance between memory and heresy that allows us to pursue what Cokinos calls "re-civilization"?

Book signing with Christopher Cokinos author of Hope Is the Thing with Feathers: A Personal Chronicle of Vanished Birds, will follow the lecture.

Christopher Cokinos is also the author of The Fallen Sky: An Intimate History of Shooting Stars (Tarcher/Penguin), Bodies, of the Holocene (Truman) and Held as Earth (Finishing Line).  His work has appeared in such venues as The New York Times, The American Scholar, Orion, Poetry, Science and Western Humanities Review.  He contributes to the Los Angeles Times and High Country News and is the winner of several national writing awards, including a Whiting and the Sigurd Olson prize.  He's at work on an anthology of contemporary Sonoran desert nature writing, among other projects, and is a Udall Fellow in Public Policy at the University of Arizona, where he is an Associate Professor of English and Affiliated Faculty with the Institute of the Environment.

Heresy is hope - Martha's flight into the future: Chris Cokinos at TEDxTucson 2013
https://www.youtube.com/watch?v=QqsisvG9bEs

"Even readers with no special interest in birds will be caught up in this marvelous book, a deeply moving cautionary tale about how we have systematically diminished the planet. In recounting the histories of six extinct North American birds, along with stories of the people who killed them off and those who tried to save them, Cokinos, a professor of English at Kansas State University, transforms each extinction into a deeply disturbing tragedy--both for the species itself, and for human civilization. Relentless, wanton hunting, more than ecosystem pressures, obliterated Cokinos's feathered protagonists, including the Carolina Parakeet, which once colored the skies with its green, yellow and reddish-orange plumage; the hardy Passenger Pigeon, flying for hours at a time in endless flocks before it vanished around 1900; the exquisite Labrador Duck; and the Heath Hen, daily fare for the Pilgrims, a holdout on Martha's Vineyard until 1932. Cokinos seamlessly weaves together priceless anecdotes, historical detective work, birders' reports, natural histories of the vanished species and his travel notes ranging from the Louisiana bayous to the steep-cliffed Bird Rock islets in the St. Lawrence Gulf, once the nesting ground of the extinct Great Auk. We also meet memorable humans like wildlife artist Don Eckelberry, who in 1944 made the last authenticated sighting of the Ivory-billed Woodpecker as its forest was being decimated. Cokinos weighs the "fantastically remote" possibility of using DNA cloned from extinct birds to resurrect these vanished species, but the real hope engendered by this extraordinary saga--beautifully illustrated with photographs, engravings, paintings and memorabilia--lies in its insistent plea to restore ecological sanity."

Recording of the event can be found here: http://library.si.edu/exhibitions/once-there-were-billions/christopher-cokinos-lecture-book-signing-10282014