Music and the Making of Modern Science and Medicine 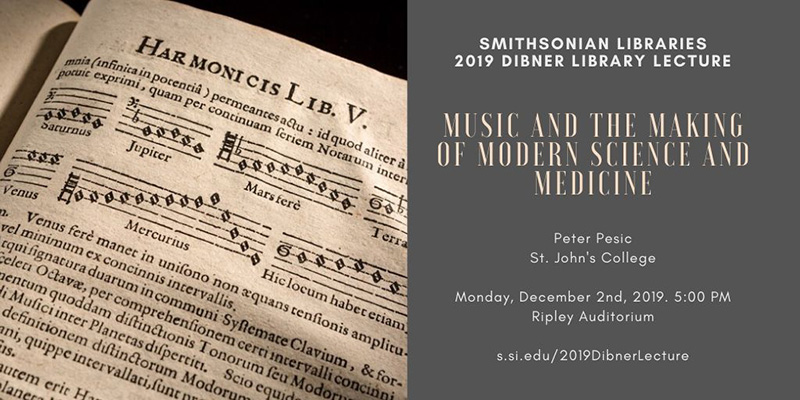 In the natural science of ancient Greece, music formed the meeting place between numbers and perception. For the next two millennia, Professor Pesic tells us in this year’s Dibner Library Lecture, “liberal education” connected music with arithmetic, geometry, and astronomy within a fourfold study, the quadrivium. He argues provocatively that music has had a formative effect on the development of modern science—that music has been not just a charming accompaniment to thought but a conceptual force in its own right.

Pesic explores a series of episodes in which music influenced science, moments in which prior developments in music arguably affected subsequent aspects of natural science. He describes encounters between harmony and fifteenth-century cosmological controversies, between musical initiatives and irrational numbers, between vibrating bodies and the emergent electromagnetism. He offers lively accounts of how Newton applied the musical scale to define the colors in the spectrum; how Euler and others applied musical ideas to develop the wave theory of light; and how a harmonium prepared Max Planck to find a quantum theory that reengaged the mathematics of vibration. Taken together, these cases document the peculiar power of music—its autonomous force as a stream of experience, capable of stimulating insights different from those mediated by the verbal and the visual.

The Smithsonian Libraries’ annual Dibner Library Lecture is devoted to the interface of music and science celebrating this connection under the aegis of the Institution’s “Year of Music.”

This event is free but RSVP is required. Reserve your seat now!

Peter Pesic is a writer, pianist, and educator. He is director of the Science Institute at St. John's College in Santa Fe, New Mexico, where he is also Musician-in-Residence and Tutor Emeritus.

His six books, seven editions, and sixty papers consider questions in the history and philosophy of science, music, and ideas. His book reviews have appeared in the Wall Street Journal and Times Literary Supplement.

Born in San Francisco of Serbian parents, he was educated at Harvard and Stanford, where he received a doctorate in physics and subsequently taught in its program on Structured Liberal Education. At Stanford, he studied piano with Naomi Sparrow and performed with the new music ensemble Alea 2; he then attended the Aspen Music School.

In the course of three hundred concerts he has surveyed the music of Schubert, Bach, Haydn, Mozart, Beethoven, Debussy, Ravel, and Schoenberg; he has given premieres of works by Nicolas Roussakis, David Lang, and Lawrence Cave. He has given concerts with sopranos Danielle DeNiese and Helen Vanni, cellists Yehuda Hanani, Wayne Foster Smith, and Antonio Lysy, and pianist Vitya Vronsky.

On the faculty of St. John's College in Santa Fe since 1980, he has been deeply involved in its unified curriculum based on close study and discussion of great works, especially in shaping its unique program of study in laboratory science, mathematics, and music.

Besides directing the Science Institute (which offers week-long intensive seminars on important texts in science and mathematics for teachers and other interested participants), he is an Associate of the Department of Physics at Harvard University.