Furniture designed and sold by the New York firm of Kimbel & Cabus. 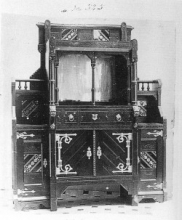 This trade catalog, containing more than 100 photographs of furniture in the “modern gothic” style, is one of the only remaining visual documentation of the furniture designed by the renowned New York cabinetmakers Kimbel & Cabus. Anthony Kimbel (d. 1895) emigrated from Germany in the late 1840s and partnered with Anton Bembe (d. 1861) to form Bembe and Kimbel in 1854 creating furniture in the Rococo-revival style. Shortly after Bembe’s death in 1861, Kimbel founded a new firm in 1862 with a French born cabinet-maker Joseph Cabus (active 19th c.) known as Kimbel & Cabus. 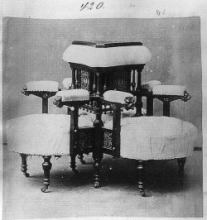 Inspired by the writings of British designers Bruce J. Talbert (d. 1881) and Charles Locke Eastlake (1836-1906), this firm developed a line of furniture in the “modern” gothic style in the 1870s that is illustrated in this rare catalog. Their furniture in this style, that won great acclaim at the Centennial Exposition in Philadelphia in 1876, is characterized by the use of ebonized (blacken or stained) woods ornamented with incised gilt decoration, inlaid tiles and painting, medieval patterns, distinctive strap-like hinges, and forms that reveal the structure of the piece. By the late 1870s, the firm was the leading interpreter of the gothic revival style used for furniture and interiors in America. Kimbel & Cabus was dissolved in 1882 so that each partner could then go into business with their sons. The Library also owns a late 19th century trade catalog from A. Kimbel & Sons that features furniture in a number of revival styles.