The Cullman Library holds approximately 10,000 volumes on the natural sciences published prior to 1840. Building on the foundation of James Smithson's mineralogical books and growing with Secretary Spencer F. Baird's donation of his own working library to the U.S. National Museum in 1882, the rare-books collection has been augmented over the years by institutional purchases and exchanges, as well as by gifts and bequests from other Museum researchers and private individuals alike. The Library's holdings are cataloged and searchable in the SIL online catalog SIRIS. 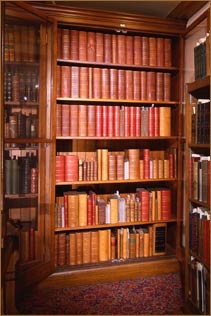 The collections are particularly strong in

Additionally, the Cullman Library has a collection of 19th century decorated cloth bindings that were originally part of the Horticulture Library. The colorful, stylistically varied, and appealing covers demonstrate the decade-by-decade technological advances available to publishers through the 19th century and form a useful body of materials for bibliographers and historians.

Included with the Mollusks collection is a 95-box set of hand-written cards listing generic and specific species names created by Gérard Paul Deshayes (1795-1875), the noted French malacologist.   William Healey Dall (1845-1927), paleontologist with the U.S. Geological Survey and longtime honorary curator of Cenozoic Mollusks at the Smithsonian, purchased the cards from the executors of Deshayes' estate, with the intention of updating the file. Although it has not yet been determined by current researchers to what extent Dall actually updated the index, it remains a useful reference to the literature of molluscan species descriptions and contains names that have been overlooked by other nomenclators, such as Sherborn's Index Animalium.

For an in-depth exploration of the particular collections of the Cullman Library, along with a useful bibliography, download the attached pdf.