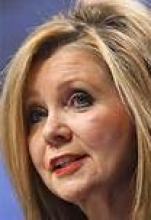 Marsha Blackburn was elected to the 108th U.S. Congress to serve Tennessee’s 7th congressional district in 2003. Her district covers Nashville to the suburbs of Memphis. She was elected a state senator In 1998, becoming the first woman to represent Tennessee’s 23rd Senate District. Her elective political career began in 1992. Prior to her political career, Rep. Blackburn was employed at Southwestern Company, an educational book marketing firm. She also owned and operated a marketing company in Williamson County, TN. She has served on the majority and minority whip teams since her election in 2002 and holds a seat on the Energy and Commerce Committee which has jurisdiction over health care, energy regulation, and telecommunications issues. In 2006 the Independent Electrical Contractors recognized her as their Lawmaker of the Year.

Marsha has earned a special reputation as a bi‐partisan leader and policy expert on telecommunications issues and intellectual property rights. She has strong ties with Tennessee’s recording industry and the songwriters and performers who make it great. In 2003 Blackburn founded and serves as Chairman of the Congressional Songwriters Caucus to give the nation’s creative community a voice on Capitol Hill. In 2007, she was awarded the Congressional Grammy by the Recording Academy; the White Hat award from the Nashville Songwriters Association and in 2008 received the Platinum Award from the RIAA. Blackburn was selected to serve as Vice Chair of the House Energy and Commerce Committee for the 113th Congress where she will continue to serve on four critical Subcommittees: Commerce, Manufacturing, and Trade (CMT); Oversight; Health; and Communications and Technology. She serves on the House Budget Committee and is a founding member of the Republican Women’s Policy Committee.

Marsha and her husband Chuck live in Williamson County, Tennessee. They have two children, Mary Morgan Ketchel and Chad Blackburn; and two grandsons. Blackburn is a native of Laurel, Mississippi and graduate of Mississippi State University.