Edward F. Caldwell & Co., of New York City, was the premier designer and manufacturer of electric light fixtures and decorative metalwork from the late 19th to the mid-20th centuries. Founded in 1895 by Edward F. Caldwell (1851-1914) and Victor F. von Lossberg (1853-1942), the firm’s legacy of highly crafted creations includes custom made metal gates, lanterns, chandeliers, ceiling and wall fixtures, floor and table lamps, and other decorative objects that can be found today in many metropolitan area churches, public buildings, offices, clubs, and residences. A majority of these buildings were built in the early 20th century, a time of tremendous growth in construction and when many cities were being electrified for the first time.

Edward F. Caldwell, a portrait painter originally from Waterville New York, became part of an active community of designers in New York City during the early 1880s. By the end of that decade and into the 1890s, Caldwell worked for and later became chief designer and vice president of the Archer & Pancoast Manufacturing Company of New York, top designers of gaslight fixtures. At this time, due to Edison’s advances in developing the electric light bulb, Archer & Pancoast began manufacturing fixtures using this new technology. 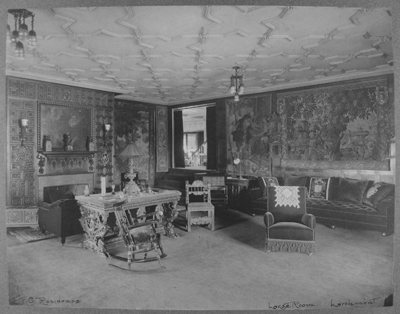 This must have been an exciting time for Caldwell, leading a major lighting firm that was faced with the challenge of mastering an understanding of electric light and adapting electric fixtures to traditional ornamental esthetics that were acceptable to the late 19th century American public, all while maintaining the highest standard of craftsmanship in their metalwork. Caldwell achieved great success in creating electric fixtures for Archer & Pancoast, most notable were three major commissions for the architectural firm McKim, Mead & White - the New York State Building at the 1893 World’s Columbian Exposition (Chicago), The Metropolitan Club (New York City) and the Boston Public Library.

Through these projects, Caldwell became a friend of Stanford White (1853-1906), and the two would continue to work together on numerous projects. Stanford White was a young architect who saw the importance that electric illumination would have in designing interiors and buildings. He understood that the new technological advances of slender tubing, small electric bulbs, concealed wiring, modern switch units, and lower voltage current linked to small sockets would allow a fixture to take new and diverse forms, sharing decorative as well as utilitarian function. White encouraged his friend Caldwell, who shared his knowledge and passion for electricity, to become a designer solely of electric light fixtures. 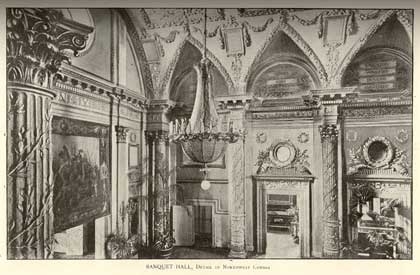 New York State building at the 1893 Columbian Exposition in Chicago.

In 1895, Caldwell established the firm Edwd F. Caldwell & Co., Inc. of New York with Victor von Lossberg, at 31 East 17th Street. Von Lossberg, a designer and draftsman that Caldwell had worked with at Archer & Pancoast, was a native of Latvia who was raised in Russia and studied design in Germany. Caldwell and von Lossberg brought skilled artisans from Europe to New York to work for the firm. They frequently traveled to Europe studying and importing historic objects for use as inspiration in the production of their electric light fixtures.

The firm flourished for over forty years due to Caldwell’s skill as an artist and as an innovative businessman coupled with von Lossberg’s design talent and his knowledge of European and historic ornament. In 1901, they established their own foundry at 36-40 West 15th Street, along with their showrooms and offices. They quickly became known for producing lighting fixtures and metalwork objects of the highest quality in bronze, iron, silver, brass, and copper. Their masterfully produced fixtures attracted commissions from some of the most prominent architects of the period including, McKim, Mead & White, Carrère & Hastings, Cram, Goodhue, and Ferguson, and Cass Gilbert. 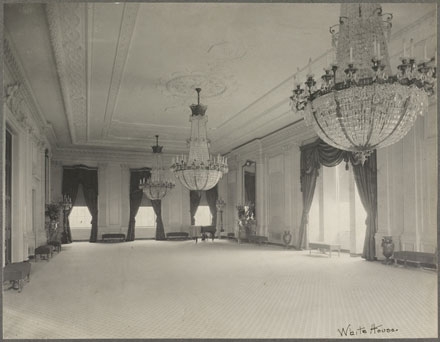 Caldwell & Co. produced a wide variety of objects based on historic styles since many of their wealthy and established clientele preferred traditional designs. They showed clients photographs and actual historic examples of French, Italian, and English forms that could be adapted into electric fixtures and that would fit esthetically into traditional or period interiors. The firm also worked closely with the architects, interior decorators and other subcontractors to coordinate the aesthetic unity of a project, using their extensive photo archive to inspire new designs. A watercolor or colored pencil presentation drawing was then created by Caldwell & Co. to be reviewed by designer and client before the piece was put into production. After a piece was produced, it was often photographed and added to the company’s massive photo archive. Today, these photographs, numbering more than 37,000 along with more than 13,000 presentation drawings, comprise the Edward F. Caldwell & Company collection at the Cooper-Hewitt National Design Library. (learn more about the collection) 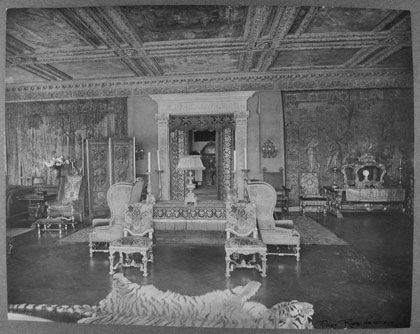 The success of the Caldwell firm was due to their ability to have such an extensive variety of historic patterns at hand that could be effectively incorporated into electric fixtures and that would enhance rather than deter the beauty of an interior. With a staff that numbered more than 1,000 in the early decades of the 20th century, they also had the ability to take on large commissions. As a result, they landed many of the biggest jobs of the day, including new churches, train stations, state capitols, residences and other public buildings throughout the country.

The firm continued under Victor von Lossberg after Edward Caldwell died in October 1914. Von Lossberg created more original designs rather then strictly duplicating antiques that had been a standard for the firm previously. Lighting and desk accessories now contained intricate gilt and enamel work. In the 1920s, the firm also explored more contemporary designs such as art deco styles for lights at Radio City Music Hall and the Waldorf-Astoria Hotel. Edward T. Caldwell, grandson of the founder, took over the firm when von Lossberg retired in 1938. Caldwell & Co. then produced more standard fixtures and fluorescent lamps until it closed due to financial problems in 1959. 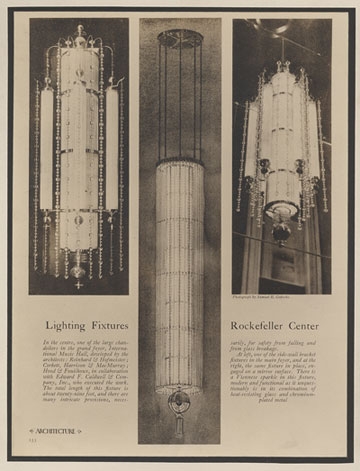 Many of their fixtures can still be seen today throughout the country and even abroad.

Some important Caldwell & Co. commissions include: