Home » Age of the Aeronaut

Age of the Aeronaut

The Dawn of Flight

Since the dawn of history, from the Greek myth of Icarus to the flying machines of Leonardo da Vinci, humankind has dreamt of flight. It was not until 1783 that dream became reality when Joseph-Michel and Jacques-Étienne Montgolfier invented the globe aérostatique (hot air balloon).

Aeronauts were the first voyagers and navigators of flight. Ballooning made celebrities of aeronauts, whose adventures filled newspapers, sold books, and inspired works of fiction. Flight offered a sense of freedom and a radical new frontier for exploration.

Flights of fancy did not stop with ballooning, as inventors, engineers, and scientists devised navigable airships and early planes. The search for new modes of flight continues to propel science and the imagination today.

Inspired by watching clothes billow over an open fire and mindful of the British chemist Henry Cavendish’s discovery of hydrogen, the Montgolfier brothers experimented with fabric bags filled with heated air. Shortly after their successful ascensions with animal aeronauts, namely a sheep, a duck, and a rooster, Jacques-Étienne became the first person to take flight on the 15th of October, 1783 in a tethered balloon.

That same year, the first free-flight with humans took place on November 21st. Physics teacher and soon-to-be first victim of balloon travel Pilâtre de Rozier, and the French military officer François Laurent d'Arlandes ascended in a magnificent balloon from the park Bois de Boulogne.  The historical event was witnessed by Louis XVI and thousands of enthralled onlookers, including Faujas de St. Fond, who documented the early history of ballooning.

I was astonished by the smallness of the noise our motion occasioned by our departure among the spectators; I thought they might be astonished and frightened, and might stand in need of encouragement, so I waved my arm with little success. I then drew out and shook my handkerchief, and immediately perceived a great movement in the yard.

Born November 12, 1746 in Beaugency, France, Jacques Alexandre César Charles was a physicist, mathematician, and pioneering aeronaut. Building off Henry Cavendish’s discovery of the lighter than air element of hydrogen, Charles designed the first hydrogen balloon. On August 27, 1783, Charles launched his first balloon, which was reportedly attacked with pitchforks by terrified peasants when it landed for being a monster from the sky. While using hydrogen was costly, time-consuming, and dangerous, hydrogen gas allowed for longer flights and achieving higher altitudes.

Technical advancement was achieved a few weeks later on December 1st, 1783 when the first hydrogen filled balloon was launched with Jacques Alexandre César Charles and Nicolas-Louis Robert. Jacques Charles conceived of the idea of using hydrogen while the Robert brothers (Nicolas-Louis and Anne-Jean) engineered the balloon. The momentous occasion was reportedly witnessed by over 400,000 spectators, including Benjamin Franklin.

...I exclaimed to my companion Monsieur Robert—I’m finished with the Earth. From now on our place is in the sky! …Seeing all these wonders, what fool could wish to hold back the progress of science!

No longer earthbound, the human spirit and imagination took flight. The age of the aeronaut was born. The new world of aeronautics became a seemingly endless frontier where adventure-bound aeronauts continuously made discoveries and pushed the boundaries of what seemed possible.

Scientific observation, adventure, and entertainment were all part of the story of ballooning. Thomas Baldwin’s introduction to ballooning included the first aerial views of earth. Baldwin’s subsequent account of his balloon travels, Airopaidia, was intended as an introductory manual to ballooning and aeronautics.

Thomas Baldwin
Airopaidia: Containing the Narrative of a Balloon Excursion from Chester, the Eighth of September, 1785
London, 1785
Gift of the Burndy Library

Always looking to improve the new field of aeronautics, restless and inventive minds turned their attention towards controlled aerial navigation. One of the earliest pioneers in aeronautics was the English engineer George Cayley.

At the close of the 18th century, Cayley put forth designs for a fixed winged flying machine with separate systems for lift, propulsion, and control; similar to how the first modern airplanes would be designed. Cayley broke new ground in aeronautics at a time when science and the public questioned the future of flight as something more than a leisure activity. Cayley’s own inventions were not successful, but his work influenced ideas on practical flying machines.

Additional advancements took place in1797 when André-Jacques Garnerin designed and tested a parachute capable of slowing an aeronaut’s descent. His first substantial parachute jump was from a height of over 3,000 feet from a hydrogen balloon above Paris.

Born in London, England in 1785 to a family of fruit merchants, Charles Green was the preeminent British aeronaut of the 19th century with over 500 balloon ascents. Monck Mason attributes the success of his record setting trip of 1836 to Green’s technical advances in ballooning. Green developed the use of coal to generate inflammable air as an alternative to the method used for hydrogen. Coal gas was cheaper and easier to produce and lasted longer than hydrogen gas. Green is also credited for introducing a trail rope, which was dropped from the balloon to act as ballast, to keep the balloon at a level height, and also provided means to steer and land balloons.

Another infamous aeronautic tale involves Monck Mason whose, at the time, record-setting trip from London to Weilburg, Germany in 1836 helped renew the public interest in ballooning. Mason was regarded as master of “aerostation”, or the operation of hot-air balloons. Mason’s account of the voyage in the famed Royal Nassau balloon of Vauxhall Gardens was a rousing success with the public. Mason was accompanied by Charles Green and Robert Holland on his historic flight. The voyage inspired Edgar Allan Poe to write a fake newspaper story in 1844, claiming that Mason had crossed the Atlantic in 75 hours. 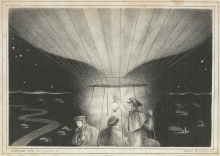 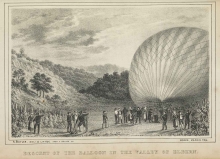 Monck Mason
Aeronautica; or, Sketches Illustrative of the Theory and Practice of Aerostation
London, 1838

The great problem is at length solved. The air, as well as the earth and the ocean, has been subdued by science, and will become a common and convenient highway for mankind. The Atlantic has been actually crossed in a balloon…

Poe’s mischievous balloon hoax was not the usual way ballooning was depicted in the press and literature. Under the name Peter Parley, Samuel Goodrich wrote popular stories of ballooning for children. Goodrich’s tales combined adventure and science as a way to educate and entertain young readers. Literature was one of the popular ways in which readers learned about new scientific fields like meteorology.

Samuel G. Goodrich
The Balloon Travels of Robert Merry and His Young Friends over Various Countries in Europe
New York, 1863

Ballooning provided an opportunity to study meteorological phenomena. Portable weather instruments, like this barometer, were used in balloon ascents to measure atmospheric pressure and record height, temperature, and humidity.

In 1862, the British Association for the Advancement of Science appointed meteorologist James Glaisher to study the atmosphere by balloon, and his work is documented in volumes such as 1871's Travels in the Air. During one flight, Glaisher and his co-pilot Henry Coxwell ascended a record 36,000 feet. The air was so thin and cold that their test-subject—a pigeon—froze, while Glaisher passed out. Coxwell had to climb into the rigging to release a valve line and stop the ascent.

As the 19th century progressed, fantastic airships became a mainstay of fiction. Intrepid travelers flew beyond the gravitational pull of the Earth to Mars. Ships sailed from the ocean into the air.

Creative minds were inspired by the possibilities that flight held and pictured a far-flung future with many of their works now revered as early examples of science fiction. In the late 1800s, novelist and illustrator Albert Robida drew images of France in the 1950s, when flying machines filled the skies.

In his 1909 story With the Night Mail, Rudyard Kipling describes life in the year 2000, featuring airships powered by a device called Fleury’s Ray. Flight is so commonplace in Kipling's fictional future that families place ads for personal pilots. 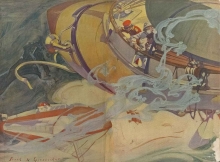 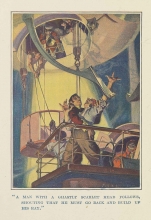 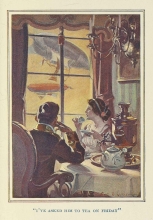 One of the few women working in the genre at the time, Sara Weiss wrote in 1903 of an airship capable of flying to Mars so scientists could study the plants, animals, and other life thought to exist on the Red Planet. 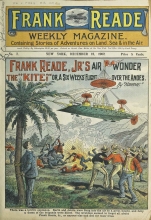 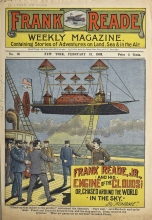 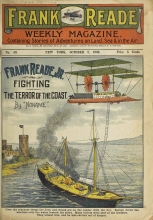 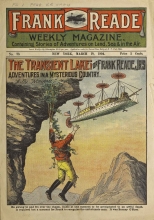 Not all future visions of flight pictured an ideal world. Writing in 1886, Jules Verne tells the tale of Robur the Conqueror, who aims to rule the sky with his airship the Albatross.

There isn’t a big power in Europe, or Asia, or America, or Africa, that hasn’t got at least one or two flying machines hidden up its sleeve at the present time. Not one. Real, workable, flying machines. And the spying! The spying and manoeuvring to find out what the others have got.

Meanwhile, H.G. Wells crafted stories that questioned where the future would take us. Lighter-than-air ships, or dirigibles, were the first engine-powered aerial ships. Wells pictured a time when such ships would become machines of war. Today his dark vision seems almost prophetic— the U.S. and Germany employed dirigibles for aerial combat during World War I.

While tales of ballooning and fanciful flying machines fascinated the public, the reality of mechanized winged flight failed to take off. Many believed that motorized flying machines could exist only in fiction.

Gravity could not hold down the future of flight as tinkerer and scientist alike aimed for the sky. Important breakthroughs were made in the mechanics of flight by studying birds, though many failed attempts were made off hills and cliffs, by inventors using mechanical wings strapped to their backs.

The dream of self-powered flight features in a novel by Robert Paltock that was released the same year the Montgolfier brothers launched their first balloon flights. The Life and Adventures of Peter Wilkins, a Cornish Man tells of a traveler who is shipwrecked at the South Pole. He discovers a cave that leads to a subterranean world inhabited by Glums and Gawrys, beings who fly using mechanical wings.

Robert Paltock
The Life and Adventures of Peter Wilkins, a Cornish Man:
Taken from His Own Mouth
London, 1783

Early aviators were able to enjoy a taste of personalized flight using gliders, and these devices set the stage for powered flight. Otto Lilienthal designed and tested the most successful gliders of the time, using designs inspired by his studies of the anatomical structure of bird wings. Lilienthal's work helped persuade the scientific community and the public that powered flight could one day be practical—even though he died in 1896 due to injuries sustained in a glider crash. 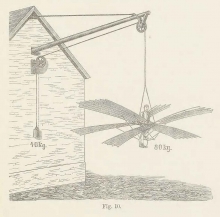 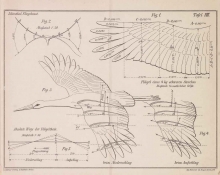 Born in 1834 in Roxbury, Massachusetts, Charles Pierpont Langley was a physicist, astronomer, inventor, pioneer in aviation, and third Secretary of the Smithsonian Institution. Inspired by the work of Cayley and others, Langley worked in earnest, between the years 1887-1903, to design and build a piloted, heavier-than-air flying machine or aerodrome. He built and tested several successful model aerodromes. In 1893 he launched a steam-powered aerodrome from a houseboat without success since the machine was unmanageable in a breeze. President McKinley became interested in Langley’s work and through the War Department funded a few more aerodromes, the first of which crashed into the Potomac River shortly after takeoff in December of 1903. Just a few days later, the Wright Brothers made history with their successful flight on December 17, 1903. 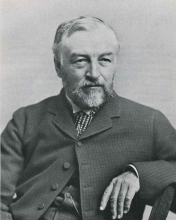 Around the same time, Smithsonian Secretary Samuel Pierpont Langley was designing and testing a motorized flying machine known as the Aerodrome. Successful flights of unpiloted model versions in 1896 prompted the U.S. War Department to fund Langley's work building a full-size Aerodrome capable of carrying a human pilot. The program ended in disaster: on its maiden voyage in 1903, Aerodrome A crashed into the Potomac River within seconds after takeoff. The craft failed again a few months later, and Langley abandoned the project, but his dreams for mechanized flight never faltered. 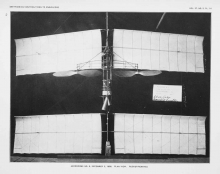 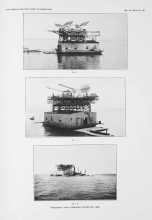 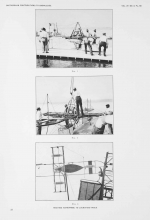 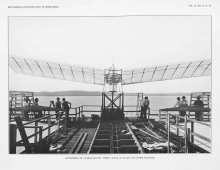 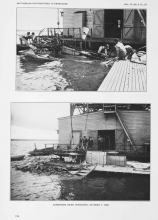 Samuel Pierpont Langley
"Experiments with the Langley Aerodrome”
Smithsonian Contributions to Knowledge
Washington, DC, 1905
Thanks for signing up!