Adventure and Exploration: To the Far Reaches of the World

Exploration to unknown lands provided the opportunity to learn about the natural world. Lured by commerce, empire, national pride, or scientific curiosity, travelers made countless scientific observations and returned with reports about little-known peoples, places, plants, and animals.

By the mid-1800s, the polar regions and the interior of Africa were among the last parts of the globe to be seen and mapped by Western explorers. These remote locales became fixtures of popular culture, as armchair travelers read about perilous adventures in these new and unfamiliar worlds. Novelists adapted true-life narratives to their fictions and spun imaginative tales of adventure in unknown lands.

Regions unknown! My imagination could depict to itself there worthy, adventurous, and devoted men, nibbling at the edges, ...conquering a bit of truth here and a bit of truth there, and sometimes swallowed up by the mystery their hearts were so persistently set on unveiling.

—Joseph Conrad, Geography and Some Explorers

British explorer Sir John Franklin was one of many Arctic explorers seeking a Northwest Passage, a northern sailing route that would connect the Atlantic and Pacific Oceans, opening a new avenue for trade. His first expedition to the Arctic (1819–1822) ended badly — 11 of the 20 men in his party died — but the public still viewed him as a hero. Franklin’s narrative of the journey, published in London in 1823, mixed adventure and discovery with science, attracting public and scholarly audiences alike.

John Franklin
Narrative of a Journey to the Shores Polar Sea...
London, 1823

Franklin’s fourth and final voyage, however, an 1845 attempt to map a stretch of the Northwest Passage, ended in disaster. The two ships, the Erebus and Terror, became ice-bound, stranding the crew, leading to starvation and death from extreme cold, lead poisoning and disease. Rumors of cannibalism circulated.

The story was a sensation in Britain and America. Lady Jane Franklin, the explorer’s widow, sponsored numerous expeditions and was an active driver of the public’s interest in solving the mystery of the lost journey, fueling the far-fetched hope of finding survivors. A considerable reward was offered, prompting numerous searches, over both land and sea.

Elisha Kent Kane, a Philadelphia surgeon, served as medical officer on the first American expedition in search of Franklin (1850–1851), financed by American merchant Henry Grinnell. While little was learned of the fate of the lost Franklin expedition on the journey, Kane’s gripping and colorful narrative made him a popular heroic figure.

Kane earned respect and fame from both the scientific community and the public. He died far from home, in Cuba, at age 36. As his body traveled from New Orleans home to Philadelphia, crowds gathered to honor him along the way.

...the last of the Danish settlements. It is the jumping-off place of Arctic navigators – our last point of communication with the outside world. Here the British explorers put the date to their official reports, and send home their last letters of good-bye.

The Inuit played a crucial role in enabling the Arctic explorers’ survival. The Franklin crew was doomed in part because they failed to learn from the locals who knew how to thrive in this challenging environment. Hall’s keen interest in these communities went beyond the scholarly study of their culture, it was also a great advantage to him and his crew. Hall partnered with Inuit guides Ebierbing and Tookolito, who helped him drum up support for further voyages, shared critical survival skills, and, though they were seldom credited, made scientific contributions of their own. 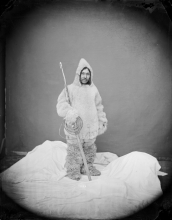 Nearly 20 years later, American Charles Francis Hall organized his first Arctic expedition, believing survivors might be found living among Inuit (Eskimos), after researching reports from prior searches. Hall became immersed in Inuit communities, collecting artifacts and learning about their culture and practices, and building an important relationship with his Inuit guides, Ebierbing and Tookolito (called “Joe” and “Hannah”). From the Inuit, he eventually acquired artifacts belonging to the Franklin crew and heard stories of their demise.

Charles Francis Hall
Arctic Researches, and Life among the Esquimaux;
Being the Narrative of an Expedition in Search of Sir John Franklin...
New York, 1865

The losses in both lives and capital incurred during these search expeditions far surpassed those of the Franklin voyage itself, though in the process many thousands of miles of Arctic coastline were surveyed. In time, interest waned in uncovering the truth of what happened, but it didn’t end: in 2014, one of the two ships from the Franklin expedition, the H.M.S. Erebus, was finally discovered off of Canada’s King William Island.

Jules Verne began his writing career penning both articles on technical and scientific news and plays, eventually merging the two in dramatic adventure stories featuring a wealth of scientific detail. Drawing heavily on everything from scientific reports to works of popular science and myth, Verne’s path to literary fame began with Pierre-Jules Hetzel, who would publish 54 of Verne’s books in the series Extraordinary Voyages. Widely considered to be the father of science fiction, and credited with predictive visions (electric submarines and lunar modules among them), Verne remains one of the world’s most translated authors. 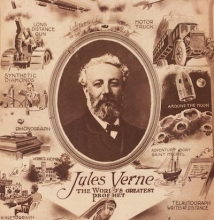 Fascination with these true-life tales raised popular interest in the Arctic to new heights. French novelist Jules Verne adapted the story of the Franklin voyage into his The Adventures of Captain Hatteras (1864), as the heroes in his fictional expedition follow in the footsteps of the ill-fated Franklin voyage. Faced with the dangers of Arctic travel and a mutinous crew, the fictional Captain Hatteras obsessively searches for a temperate ice-free polar sea. The story takes a further fantastical turn, as the travelers find an active volcano “peering up like a lighthouse at the North Pole.”

Other novelists also saw the imaginative possibilities of Arctic adventures. The Frank Reade Weekly Magazine, a series of cheap and colorful dime novels aimed at a young, predominantly male audience. Popular with the growing literate middle class, they spun tales of adventure in exotic settings – often in polar regions—with the inventor hero traveling in futuristic airships and submarines. Author Thomas Wallace Knox, having traveled the world, wrote a series of adventure novels, also aimed at young boys. His The Voyage of the Vivian details both the Franklin expedition and the theory of an Open Polar Sea. Additionally, Gordon Stables, a Scottish naval physician, used his experience on whaling ships to bring realism to his sailing adventure stories, choosing the compelling Arctic as the setting for many fictional exploits. 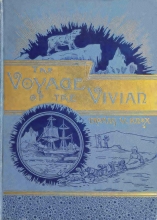 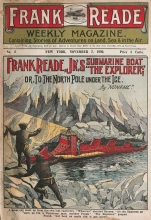 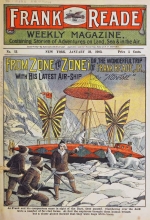 Interest in all things Arctic also found its way into parlors and music halls in the form of popular songs. Among them was “Northward, Ho! or, Baffled, Not Beaten,” with lyrics penned by John P. Cheyne, a British naval officer and veteran of three expeditions in search of Franklin. He hoped his song would drum up popular support for his unconventional (and unsuccessful) idea to use manned balloons to reach the North Pole.

In about 1850, broadsides with the lyrics to another song began to circulate, testimony to the impact the story of the lost Franklin expedition had on the public. “Lady Franklin’s Lament,” often sung to the tune of a traditional Irish ballad, recounts the tragedy from the point of view of a sailor aboard ship who dreams of Lady Franklin mourning her husband’s disappearance.

Expeditions to Africa — with its wide expanse and varied cultures, unfamiliar to Western eyes—made for equally compelling tales. The public was transfixed by illustrated magazines with the latest news of adventurers in exotic locales. Though risks were certainly involved in these expeditions, Africa was sensationalized in the press, depicted as mysterious and fraught with danger, further piquing the interest of folks back home.

Perhaps the most widely recognized African explorer in his day, Dr. David Livingstone went to Africa to put his medical expertise to use, spread Christianity, and bring awareness of the slave trade to the public. Livingstone was a hero to many in Britain, and detailed accounts of his life and adventures were reported in magazines and newspapers. His extensive travels greatly improved geographical knowledge of southern and central Africa. His popularity at home was immense; his Missionary Travels sold more than 70,000 copies within a few months of publication.

An increasingly curious public sought out ways other than books and newspapers to feed their interest in these distant lands and their celebrity explorers. Panoramas, large-scale paintings in the round, were the IMAX movies of the time. Audiences enjoyed the immersive and thrilling illusion of visiting far-off places. New developments in photographic printing helped spur interest in magic lantern shows. These were extremely popular forms of entertainment and education, featuring glass slides with printed, hand-painted, or photographically reproduced images viewed through a kind of projector.

Most exploration narratives contain extensive scientific appendices in addition to the wealth of information contained in the main text. Whenever possible, explorers equipped themselves with scientific instruments for studying their surroundings. One of the most important tools, however, was the humble sketchbook – for mapping out stretches of coastline, recording geological formations, as well as everything else in sight. Burton had considerable artistic skill (some of his original sketches are in the Libraries’ collections); his detailed field sketches were often the basis for the illustrations in his books. 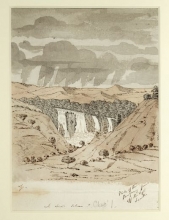 Other narrative accounts of African expeditions also entranced the public. British explorers Richard Burton and John Hanning Speke traveled west from Zanzibar to the shores of Lake Tanganyika, seeking the source of the Nile. This account of their travels, mixing tales of risk and adventure with Burton’s discerning observations, was widely read, thrilling the audience at home.

Heinrich Barth’s account of his travels was considered the one of the most informative and scholarly studies of Africa at the time. Fluent in Arabic and numerous African languages, Barth studied the oral traditions and histories of the peoples he encountered, befriending local chieftains as he traveled from Tripoli south to Lake Chad and Cameroon, and east to Timbuktu.

Verne looked to these expeditions for inspiration for his novel, Five Weeks in a Balloon; Voyage of Discovery in Africa, by Three Englishmen, first published in Paris in 1863, and the first book issued with French publisher Pierre-Jules Hetzel. With this work, Verne establishes his formula for the successful tales to come, merging risk and adventure with a wealth of technical and historical detail. The book touches on important contemporary issues, like the slave trade and race, and describes recent efforts to map the interior. His fictional heroes trace the paths taken by the real-life explorers, seeking “their point of intersection, which no traveler has yet been able to reach... the very heart of Africa,” while crossing the continent in a balloon outfitted with Verne’s imaginary technological improvements.

Africa is, at length, about to surrender the secret of her vast solitudes; a modern Oedipus is to give us the key to that enigma which the learned men of sixty centuries have not been able to decipher.

An instant best-seller, H. Rider Haggard’s King Solomon’s Mines was the first English novel set in Africa and was an influential early example of the popular “Lost World” genre of science fiction. Following an ancient map drawn, in his own blood, by a 16th century Portuguese explorer, the heroes seek the fabled mines and in the process discover an unknown society cut off from the rest of the world. Haggard had lived in British colonial South Africa and modeled his hero Allan Quartermain after famous big game hunter Frederick Courtney Selous. Recent discoveries of the ruins of ancient civilizations, like Great Zimbabwe in southern Africa, and Egypt’s Valley of the Kings, helped inspired the plot, and established a new genre of fiction.

By the end of the 19th century, the interest in scientific discovery in Africa waned, as explorations of the interior, missionary efforts, and commercial interests led to the occupation of African lands by European powers competing for colonial territories. But the allure of Africa’s landscapes and cultures had left its imprint on the world of fiction.

Thanks for signing up!