In the early 1800s the growing sciences of chemistry and electricity offered provocative new tools to help solve an ancient problem: what is the nature of life? The recent experiments of Luigi Galvani hinted at electricity as a life force.

Had Luigi Galvani discovered the spark of life? During an electrical experiment, Italian physician and anatomist Luigi Galvani watched as a scalpel touched a dissected frog on a metal mount — and the frog’s leg kicked. Further experiments led him to theorize that living bodies contain an innate vital force that he called “animal electricity.” In 1791, Galvani published his findings in De viribus electricitatis in motu musculari, and his provocative theory set the world of science abuzz.

Italian physicist Alessandro Volta repeated Galvani’s experiments, but concluded that the two metals alone were responsible for the electric charge, and that certain fluids could conduct electricity. He denied Galvani’s theory of animal electricity and thus began one of science’s most famous disputes (in time, both theories would be proven right). Volta’s findings led him to develop the first battery capable of a continuous electrical current, known as the Voltaic pile, in 1800. Composed of a stack of alternating discs of copper and zinc separated by cardboard soaked in brine, it was a game-changer in the study of electricity and its inventive applications.

Giovanni Aldini, Galvani’s nephew, defended and built upon his uncle’s controversial theory of animal electricity. In operating theaters crowded with spectators, Aldini conducted sensational electrical experiments throughout Europe, often making use of a Voltaic pile, on the bodies of sheep, dogs, oxen, and even recently executed convicts. With eyes opening and faces grimacing, severed heads appeared to be shocked into life again. Though theatrical and provocative, his experiments were efforts to better understand the workings of electricity in the body, and enable the development of therapeutic galvanic treatments.

To conduct an energetic fluid to the general seat of all impressions; to distribute its influence to the different parts of the nervous and muscular systems; to continue, revive, and, if I may be allowed the expression, to command the vital powers; such are the objects of my researches, and such the advantages which I propose to derive from the action of Galvanism.

—Giovanni Aldini, An account of the late improvements in galvanism, 1804

Aldini's most famous demonstration was on the recently hanged body of convict George Forster at the Royal College of Surgeons in London. The dramatic results shocked spectators, convincing some they were witnessing a dead man come to life. The vivid descriptions of the scene in popular newspapers made an impression on the public. Could the dead be brought back to life? 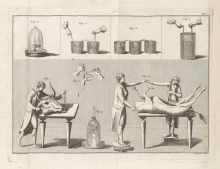 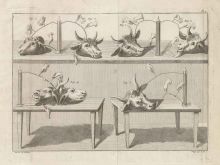 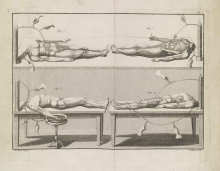 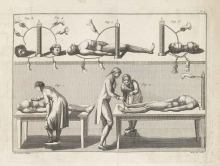 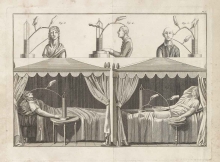 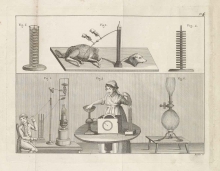 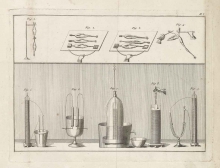 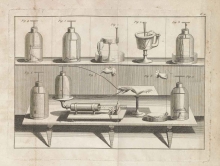 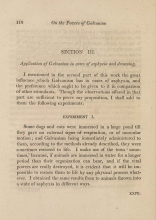 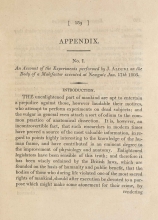 Medical practitioners wasted no time embracing this developing science, and treatments based on galvanism were widely touted as cure-alls. American physician Elisha Perkins, for one, claimed that his “tractors,” a pair of iron and brass rods, each less than three inches in length, could cure a range of ailments by drawing extra “electrical fluid” from the body. Many were skeptical, and decried Perkins as an opportunist and a quack, so much so that, while in London, Perkins’ son, a bookseller, enlisted writer Thomas Fessenden to write a satirical poem lampooning the naysayers. The tractors enjoyed both popularity and ridicule for a brief period, on both sides of the Atlantic.

Mary Shelley chose "The Modern Prometheus" as the subtitle to her novel. In Greek mythology, Prometheus, the creator of mankind, stole fire from Olympus, against the wishes of Zeus, to give it to man. He is doomed to eternal punishment as a result. The Prometheus myth resonates with Shelley's story: Dr. Frankenstein, too, created life; he suffers unyielding punishment as a consequence of his action; and, though Shelley is inexplicit about the Doctor's methods of animating his Creature, it echoes the illicit harnessing of electricity, a kind of fire. The epigraph chosen by Shelley comes from Milton's Paradise Lost, and quotes Adam's grievance to his own Creator: "Did I request thee, Maker, from my clay / To mould me Man, did I solicit thee / From darkness to promote me?" 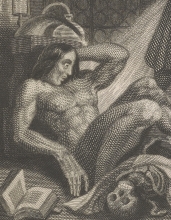 The application of electrical shocks became a popular treatment for a vast array of medical conditions in the 19th century and beyond. While the limits and intricacies of biological electricity were not yet known, the findings of Galvani laid the groundwork for modern neuroscience and electrophysiology.

Galvani’s discoveries, and those that followed, also served to inspire one of the most famous examples of science fiction: Frankenstein, or The Modern Prometheus.

In the summer of 1816, Mary Shelley and her soon-to-be husband, the poet Percy Bysshe Shelley, were visiting Lord Byron in Geneva. The literary group gathered there at his villa took on the challenge of each coming up with a ghost story. Two years later, Shelley would finish Frankenstein: or, the Modern Prometheus. Her gothic tale explores the fate of a recklessly ambitious scientist who succeeds in creating life from death - and that of the ruined creature he reanimates.

Though not yet 20 when she began Frankenstein, Shelley was no stranger to the creation and loss of life. She bore two children, losing one in infancy, and she lost her half-sister to suicide, all before the book was published. “Perhaps a corpse would be reanimated,” she wrote in the preface to the 1831 edition; “galvanism had given token of such things.”

The daughter of writer and progressive political philosopher William Godwin and feminist writer Mary Wollstonecraft, who died soon after Mary's birth, Shelley grew up in an intellectual environment. Her association with Percy Shelley and their literary circle further enriched her exposure to the thoughts and issues of the day, both literary and scientific.

With an anxiety that almost amounted to agony, I collected the instruments of life around me, that I might infuse a spark of being into the lifeless thing that lay at my feet. It was already one in the morning... when, by the glimmer of the half-extinguished light, I saw the dull yellow eye of the creature open; it breathed hard, and a convulsive motion agitated its limbs.

Shelley cites Erasmus Darwin, grandfather of Charles Darwin, as an influence on her tale. He is mentioned explicitly both in her introduction to the 1831 edition as well as in the preface to the first edition, written for her by her husband. A famed physician who penned book-length, heavily footnoted poems on a wide array of scientific subjects, Darwin was one of the best known intellectuals of his day, noted for his early thoughts on evolution and other scientific speculations, including the reanimation of dead microorganisms.

Erasmus Darwin
The Temple of Nature, or, The Origin of Society: A Poem, with Philosophical Notes...
Baltimore, 1804
Gift of the Burndy Library

The composition of the atmosphere, and the properties of the gases, have been ascertained; the phenomena of electricity have been developed; the lightnings have been taken from the clouds; and, lastly, a new influence has been discovered, which has enabled man to produce from combinations of dead matter effects which were formerly occasioned only by animal organs.

—Humphry Davy, Discourse, introductory to a course of lectures on chemistry, 1802

Pioneering British chemist Humphry Davy was charismatic and articulate and believed chemistry was essential to understanding the world around us and a great benefit to mankind. His popular lectures and passionate promotion of the science helped achieve the inclusion of chemistry in the curriculum and inspired a wealth of amateur enthusiasts, as well as a gifted new generation of scientists. Presiding over a massive voltaic pile, before a packed house at the Royal Institution, Davy manipulated matter with a showman's expertise, isolating new elements and decomposing metals with great theatrical aplomb, sharing this new science with the public. 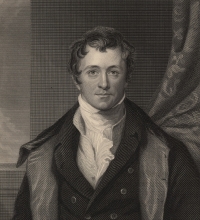 Sir Humphry Davy, a Cornish chemist and inventor whose work Mary Shelley had read, applied Volta’s battery to his experiments. In his popular lecture series, he spoke about the “creative” powers of the scientist, “which have enabled him to modify and change the beings surrounding him, and … interrogate nature with power.”

It is widely thought that Mary Shelley may have used Humphry Davy as a model for Victor Frankenstein. Certainly they shared a passion for chemistry. However Davy, along with most of his contemporaries, believed strongly that science, the new science of chemistry in particular, was unequivocally a power for the public good. Shelley’s novel upended that conceit, presenting perhaps for the first time, a vision of science – unchecked scientific ambition, in particular – with a dark side.

Thanks for signing up!